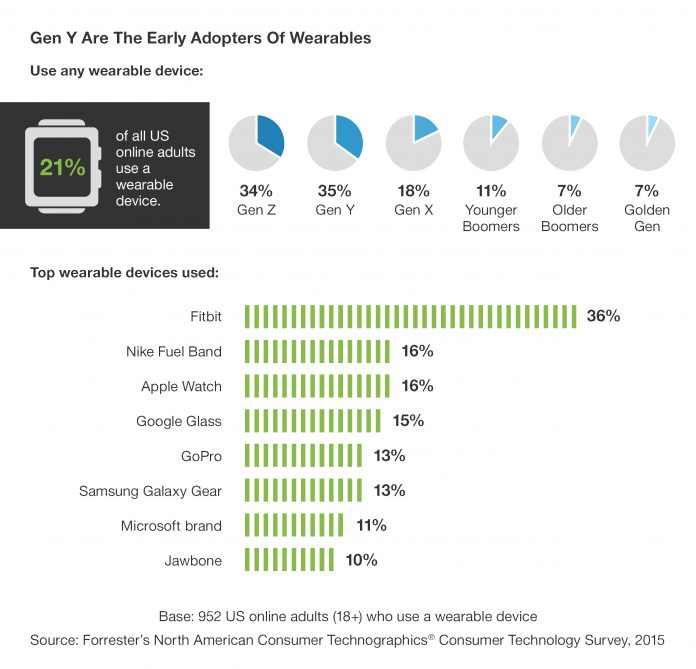 A recent survey from Forrester Research concludes that online adults show a high adoption rate of 21% driven by the smartphone boom. Fitbit leads the market, followed by Nike Fuel Band and Apple Watch.

According to the survey, tech-friendly Millennials are the strongest user group with with a 35% adoption rate. Market leader Fitbit dominates the wearables market with 36% market share, based on cheap devices starting from $60.

The second position is shared between the Apple Watch and the Nike Fuel Band, both at 16% market share which is less than half of Fitbit´s share. Close on the third position comes Google Glass with 15%, a relatively high number, taking into consideration it often being called a fail in the media.

“Mass adoption of smartphones made the components cheap.”

The result is that fitness wearables have matured from a “fun to have” gadget for those tackling a new goal, to a category impacting the financials of entire industries.

For example, health payors and providers are starting to imagine the impact of more active members on the bottom line. We can expect to see sales of fitness wearables like Fitbit that target a broad audience grow for years to come.”

Regarding smartwatches Ask concludes that “Samsung, Pebble, LG and others quietly awaited Apple’s launch in the spring of 2015”, and that “few companies outside of Apple can create consumer demand for a product they’ve never heard of or never knew they needed.”

With the Apple Watch being still new and expensive, Forrester expects “Apple to gain share with subsequent releases as the price goes down and brands figure out the best use cases for an on-wrist device.”