Microsoft has finally decided to improve the Windows 10 dialog box for environment variables. The interface of this element did not see any improvement for over a decade.

Mostly used by system administrators, the setting for environment variables is hidden in the Advanced System Properties of the Control Panel. Peter Bright from Ars Technica has spotted the coming change while playing around with the latest Windows 10 Preview builds.

He also remembers the wired anecdote of the fonts dialog box of  Windows 7, which used outdated style from the days of Windows 3.1. Microsofts fix in that case had been to remove the dialog completely, Windows now uses just drag and drop to bring new font files in.

Now in the case of the Environt Variables Dialog, Windows 10 still uses the old unpractical style of a small unresizable window. It makes even checking values for PATH and folders an annoying experience.

Its performance is really cramped and there is no room whatsoever to edit or modify lengthy environment variables. This issue particularly goes for PATH. Its most essential environment variable which stores the names of all the directories that the system searches while looking for executables, applications, and development tools. It quickly gets unwieldy, and is very complicated to access due to the inflexibility of the dialog box. 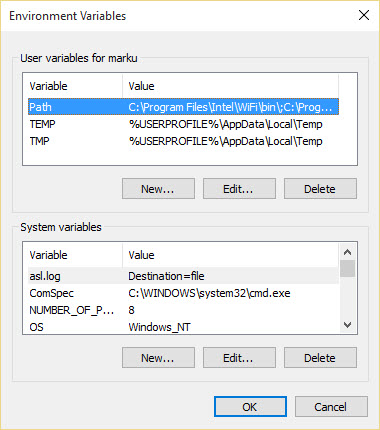 The latest insider Build of Windows 10 shows that the company has finally given some attention to environment variables. The dialog box has been modified with a bunch of features, and is now resizable so that the user can see the variables in full.

The upgrade also handles the PATH variable specially. The new dialog knows that a PATH variable contains a set of directory paths, and allows the user to edit them individually, rather than showing them as a single text.