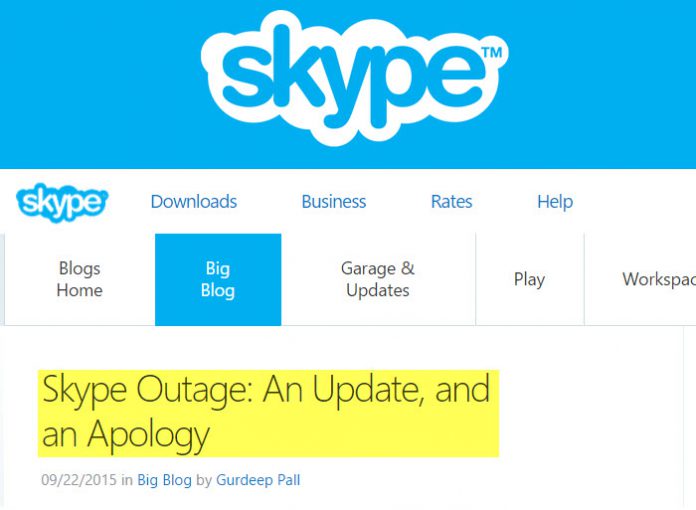 Two days ago Skype had one of its biggest downtimes in its history. For about 12 hours, millions of users could not make video or voice calls. Now Microsoft apologizes and explains what happened.

In a blog-post Microsoft lays out the reason for the long outage had been a “larger than usual configuration change”. As a result all connected users got disconnected from the servers running Skype. However, Skype for Business did not get affected by the problem.

“We released a larger-than-usual configuration change, which some versions of Skype were unable to process correctly therefore disconnecting users from the network.

When these users tried to reconnect, heavy traffic was created and some of you were unable to use Skype’s free services, including messaging, presence, and contact list management.

Others could not sign in or out of Skype altogether, or make calls to landlines or mobile phones. Skype for Business was not impacted.”

Although they became aware of the problem quickly, it took engineers a whole day to re-establish the service. Skype resumed back to normal availability around midnight GMT. Resonsibles at Microsoft feel very sorry about the incident and send apologies to everybody who got affected.

“No matter how quickly we were able to resolve this issue, it would not have been quick enough. We know many of you needed to use Skype during the outage, and finding that you couldn’t would have been incredibly frustrating.

We are extremely sorry for any inconvenience caused to our users, and appreciate your patience while we addressed the issue.