Update: The rumors about ‘Windows 365’ have been proven wrong. The name is an invention of the MBA students mentioned below.

Ongoing rumors say that Microsoft considers to make Windows 9 basically free for everybody with an existing Windows license and to follow Apple’s path of offering a free OS. But this doesn’t mean they give up on making money with Windows, and a subscription based Windows 365 could be the answer like newest details from job postings and Linkedin indicate.

A recent job posting supports rumors that Microsoft indeed is working on Windows as a Service or something like Windows 365, following the logic of Office 365 as a service and cloud-based product. Of course the final product name is still to be seen and bloggers shouldn’t play any rumors to badly. As we all know now, Microsoft might just fool all of us, like it happened with the August Update of Windows 8.1 (aka Update 2). 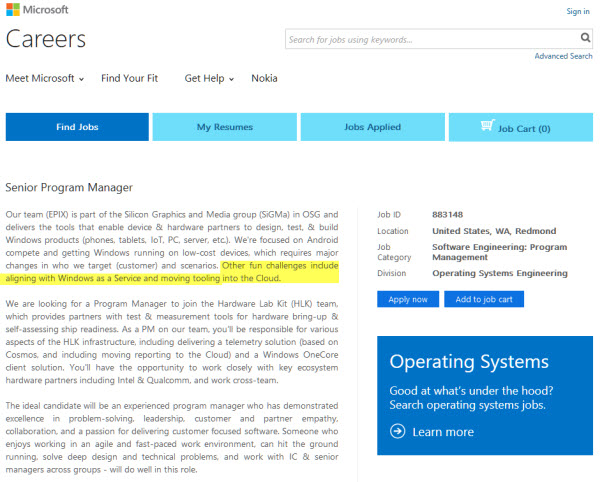 However, at this stage ‘Windows 365’ seems to be at least an internal codename as it also appears on Linkedin-listings like the one from Remi Zajac who is currently a Principal Program Manager Lead at Microsoft. According to the profile his role is to “Lead the Bing Captions, Document Understanding and Query Semantics teams, deliver best experience for Bing users on desktop and mobile, and build services to help Microsoft partners, including Windows 365 and IE to leverage Bing technology“.

Also Linkedin profiles from professionals outside of Microsoft give a hint about a coming cloud-oriented ‘Windows 365’ as a subscription service. The term ‘Windows 365’ appears on the profile of Berk Mumyakmaz, currently an MBA intern of T-Mobile.

Another dutch MBA student and contact of Mumyakmaz, Lu Chen, has the same reference on her profile which lowers the probability that this is false information. Obviously both of them participated in a related project on the Redmond campus earlier this year.

Mary Jo Foley from ZDNet had written about Windows 365 already before, but at that stage said she insisted “that Windows 365 is not real, not in development and not on the roadmap”. The latest appearances of the term and the job opening could prove her wrong.