A lot is being said about the difficult times of Microsoft recently. The just announced mega-layoffs of historical size don’t help a lot when it comes to Microsoft’s brand perception. But how does Microsoft do from a consumer point of view?

The extensive Brand Desire 2013 study from the renowned people of M&C Saatchi hints to some interesting changes in the market and that things are not all that bad for Microsoft. At least in the USA as Microsoft’s most important market, it’s home-market.

In Brand Desire 2013, 20,000+ consumers of 3 countries (US, UK, Australia) have been asked about their perception of 678 brands. According to the authors this makes “Brand Desire the world’s largest study into what creates and sustains desire for brands”.

In the section about most desireable handheld technology brands, Android and Samsung gain the top-positions which shouldn’t be a surprise, especially for the case of Samsung who was able to establish an excellent reputation with splendid Android-hardware. Some might think there should be Apple, the iCompany who reinvented the cult for technology. But the real surprise is Microsoft’s score for the BDI (Brand Desire Index). In 2013 Microsoft outstripped Apple which saw a dramatic drop of 10% in comparison to the previous year. 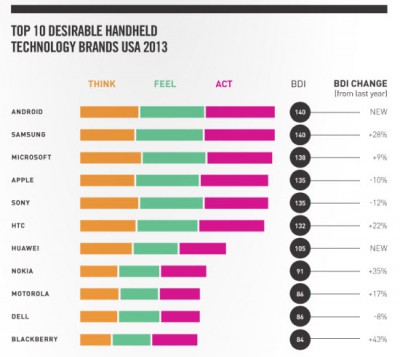 With an increase of 9%, Microsoft is up nearly up the same than Apple is down. Are people getting tired or at least less fascinated about iPhone, iPad and Co? While market share tells a different story, by brand image the future of Lumia, Surface and Windows Phone might be brighter than exptected. In January GeekWire already reported that Microsoft as a brand is more trusted by consumers than Apple.

On a global scale however, the story still looks different. Apple claims the top position both in UK and Australia. It would be interesting to the brand image of other countries, but unfortunately this is all what Brand Desire 2013 has to offer. 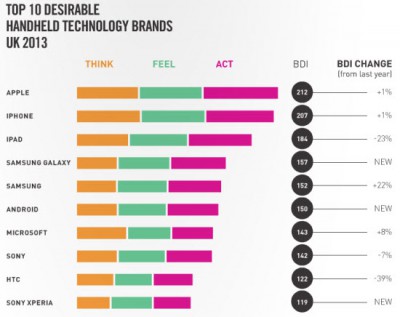 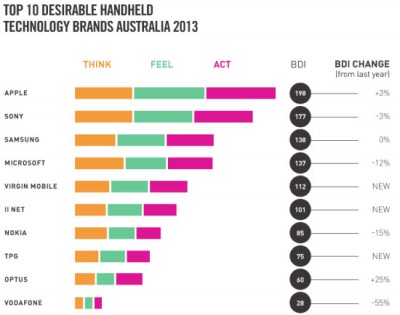